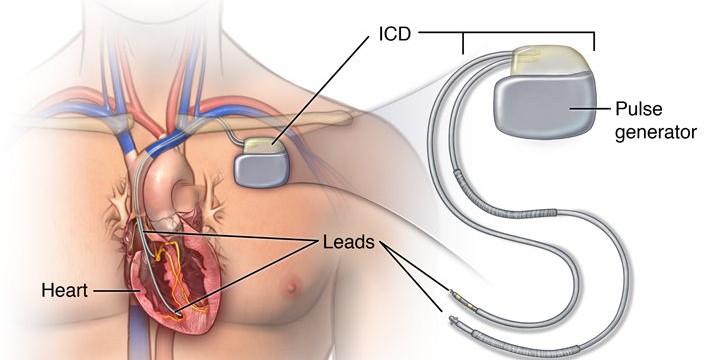 ICD Surgery (implantable cardioverter-defibrillator) is one of the services of IranMedtour, which is provided by the best cardiac surgeons, along with accommodation, translator, companion nurse, and city tour at an affordable price in Iran.

What is ICD in cardiology?

An implantable cardioverter-defibrillator (ICD) is a small electronic device installed inside the chest to prevent sudden death from cardiac arrest due to life-threatening abnormally fast heart rhythms (v ). The ICD is capable of monitoring the heart rhythm. An implantable cardioverter-defibrillator (ICD) is a device similar to a pacemaker. It sends a larger electrical shock to the heart that essentially “reboots” it to get it pumping again. Some devices contain both a pacemaker and an ICD.

An implantable cardiac device, or ICD, can be implanted to restore the heart’s normal rhythm and prevent sudden cardiac death. How an ICD is implanted and works are depicted.

Is an ICD a pacemaker?

Most arrhythmias result from problems in the electrical system of the heart. If your arrhythmia is serious, you may need a cardiac pacemaker or an implantable cardioverter-defibrillator (ICD). They are different devices that can be implanted in your chest with the same surgery. Most new ICDs can act as a pacemaker but pacemakers cannot be used as an ICD. There’s also a newer type of ICD where the pacing lead is implanted under the skin (subcutaneously) and works like the conventional ICDs.

Who is a candidate for ICD surgery?

ICDs are often used as a preventative treatment for people thought to be at risk of cardiac arrest at some point in the future. If the ICD senses the heart is beating at a potentially dangerous abnormal rate, it’ll deliver an electrical shock to the heart. This often helps the heart to return to a normal rhythm. You might need an ICD if the rhythm of your heart’s lower chambers, called the ventricles, is dangerously abnormal. You might also need one if you’ve had a heart attack or cardiac arrest, which is when your heart stops working.

What is the purpose of an ICD surgery?

ICDs continuously monitor your heartbeat and delivers electrical pulses to restore a normal heart rhythm when necessary. An ICD differs from a pacemaker but it is also used to help control abnormal heart rhythms.

Before ICD implantation surgery, as with other cardiovascular surgeries, a few blood tests and an X-ray from the chest are necessary to determine your overall health status and other heart-related disorders.

How long does it take to heal from a defibrillator implant?

Because every patient is different, it’s hard to say with certainty what your recovery time will be. In general, you should be able to return home the day after your implant procedure. Full recovery from the procedure normally takes about 4 to 6 weeks.
After ICD implantation surgery, you may experience some discomfort at the incision site. You may experience some bruising and discoloration around the insertion site. You may eat and drink as normal when you return to the Day Unit. Your nurse will assess and assist you as necessary.

The cost of ICD surgery

The ICD Surgery in some Asian countries and our neighbors such as India, Turkey, and Singapore can cost you around 5000 USD, while the same surgery in the US can cost you around 27,000 USD.
Iran is one of the countries performing ICD in different general and private hospitals. Insurances usually cover the ICD implant surgery, so it costs less in Iran. The cost of ICD surgery for foreign patients is about one-third of their countries.
Despite the fact that the ICD surgery in Iran is performed by the most professional surgeons in modern and developed hospitals, but the cost is significantly less than in other countries. The highest rate for an ICD implant in Iran is about 3000 USD which is even lower than Asian countries and our neighbors.

If you would like the best cardiologists in Iran’s first-class hospitals to perform your surgery, and at the same time be comfortable and stress-free during your treatment and stay in Iran at a reasonable cost, like your home, take a look at the IranMedtour ICD Surgery package. 😊